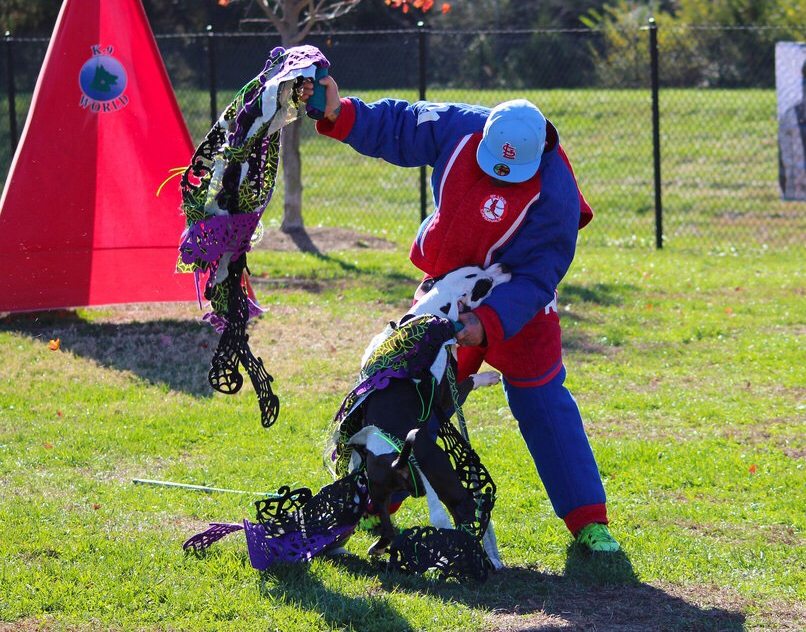 I have been training dogs my entire life. As a child, my parents showed both German shepherds in AKC Obedience and Beagles in Field Trials for rabbit hunting. You could say that at an early age I was taught Dogs were meant to work with us. I was just a kid when I first began attending search and rescue tracking and Schutzhund clubs. By the age of 16, I had fallen in love with the American Pit Bull Terrier and acquired my first pit bull by way of rescue. This prompted me to buy any and all books and resources, pit bull. I was passionate about learning everything I could about the breed and its fascinating history. I showed in conformation with my first pit bull and competed in weight pulling competitions. It took several years to find acceptance into a Schutzhund club with a pit bull as back in those days it was still a taboo in the Midwest. Before the age of 21, I had written, directed and produced a DVD documentary called, “My So Called Truth of the Game Bred American Pit Bull Terrier,” which has sold over 2600 copies independently to people all over the world. I found such a passion in competing with my dogs and changing people’s negative view-point and prejudices of the American Pit Bull Terrier. It only fueled my thirst for further knowledge about all things dog training and behavior related.

While teaching pet dog obedience, I discovered I had a knack for working with dogs that were a bit too much for your average pet dog trainer and I started specializing in removing aggression and anxiety. I eventually became a doctor trained veterinary technician and co-hosted a radio talk show called, “Animal Talk” with Dr. Lucas answering questions about K9 behavior and dog training. My infinite quest for new and exciting things to do with and title my dogs led me to a Leerburg video on YouTube with the context of the subject line saying something to the extent of “Was I tired of the politics plaguing Schutzhund and if so to check out Mondio Ring.

Well, I did and I was hooked. I caught the Mondio Ring fever and have spent countless hours studying Mondio Ring videos on YouTube over the last three several years. I have trained my own dog Reno for the sport. As a Decoy, I enjoy working with dogs that may be viewed as softer/less confident and building them up to a strong, confident dog in the sport while also making the sport fun for both dog and handler.

1. What club do you belong to? founder MidWest All breed MondioRing Assocation

3. What does Mondio mean to you? Mondio to me is a Trainer’s Game. It is a fun and exciting sport that tests not only the dog’s intelligence and working ability, but also tests how reliable the training methods are by providing a variety of situations with elements of random surprise in each exercise. The exercises are completely different at each trial all while being spectator friendly. You don’thave to be a protection sports enthusiast to be impressed by a Mondio Ring demonstration. USMRA members are one of the most friendly, dog loving and all breed welcoming groups I have ever had the pleasure to be wok with.

4. What inspired you to become a Decoy? Necessity! Ten years ago not too many people were willing to put on a bite suit and I started training my own dogs due to lack of access to decoys. As a result, I fell in love with decoy work.

5. What is the most important thing to you as a Decoy? I hope everyone answers this question with safety first so that’s probably going to sound redundant here now but I would like to add sportsmanship and fairness. Also, all parties involved should enjoy what is going on Decoy, Dog and Handler.

6. With one word describe yourself as a decoy? Fair

7. Where did you first start Decoying? St. Peters MO, my friend and early role model Bill Behr was prepping his Dog Lenze for the 2006 WDA Schutzhund Regional Championships and needed a faster, more agile decoy to bring up the speed in his dog.

8. Who got you into Mondio Ring? Ed Frawley the owner of Leerburg. By way of YouTube

9. How would you describe your Decoying? I like to think of myself as a coach or good sparring partner. I want to build the dog up and make him believe he is unstoppable.

10. I’m the President Decoy and Training director for the MidWest All Breed MondioRing Assocation

11. What other interests do you have? I am a musician. I play seven string guitars in a hip hop heavy metal band. I also enjoy hunting, fishing, the outdoors, going to the gym and health food. I am a huge fan of success conditioning and Tony Robins.

MondioRing has inspired me to become the best trainer I possibly can. I have the pleasure of running a successful company called iMpower K9 LLC Behavioral Health and Dog Training. We train everything from pet dogs, hunting dogs, handicap assistance, personal protection and police dogs across the board. Being involved in Mondio Ring has given me ideas that have improved my skills as a professional trainer.