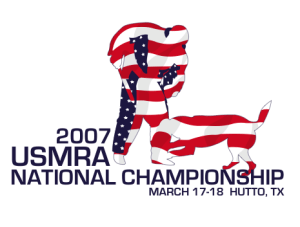 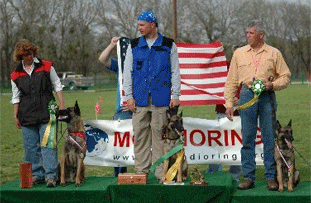 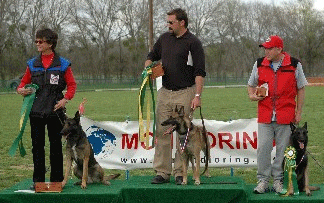 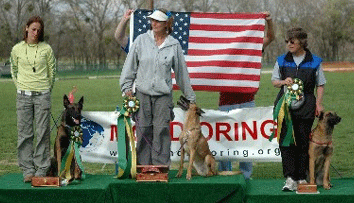 The theme for the trial was Alice in Wonderland, and took place at Triple Crown Dog Training center in Hutto Texas. Our first Championship was judged by Margaret McKenna from Belgium and the decoys were Tim Bartlett, Chris Moody, and Matt Moore. Rich Schneider did a nice job as decoy for the Lone Star Club Brevet the day before the Championship weekend. Overall the teams gave very nice performances with difficulties at the higher levels that will be improved by experience and age. All showing USMRA as a young but enthusiastic and capable organization with the promise of a good future. We are all very proud of the teams who showed in our very first Championship. This story briefly describes the exercises and notes where points were lost so we can all learn for our next trials and be ready for a very competitive Championship in 2008!

Handler’s were escorted on to the field by a tall blonde Alice and left on the podium for introduction to Judge and audience. The Judge was nicely dressed in red and white and wore a Queen of Hearts crown.

Heeling patterns were around the various field objects and most mistakes here were due to incorrect heeling patterns and dogs too far from handler in their heeling position.

Absence was near the middle of the field near where the guard of object would take place for the MR3. For the brevet, Ivan strolled near the dog waving a royal scepter that made music. For the MR levels croquet was played with flamingo clubs and squeaky hedge hog toys. The game was played closer to the dog as the levels increased. All the dogs seemed to do this well.

The MR1 retrieve was a hard plastic ball pump. MR2 was a flamingo without legs, MR3 was a very squeaky hedge hog made more difficult by returning to the handler between two rabbit hills and attending bunnies. All dogs retrieved the object. Main issues were chewing, dropping object before the out, or not sitting at the end of exercise. The judge advised not to throw objects much beyond the required 5 meters so the dogs could finish within the time of 15 seconds.

Positions were done between two lawn covered boxes as “rabbit holes” which had stuffed bunnies in their entrance. For the MR3 handlers called the commands standing at the other end of a row of giant mirrors which they walked through. Main difficulty was in preparation and start positions, the dogs wanted to be ON the boxes instead of BETWEEN. Some points were lost due to improper starts made more difficult by starting the dog in a stand position and leaving. A few seemed distracted and did not change position. One anticipated the recall and returned before the whistle.

Food refusal was done near this spot and the dogs were tossed big bologna slices. MR2 and 3 food refusal was done with handler seated at Tea Party and food thrower seated next to dog. Food was casually dropped in front of dog. Food was left on the field which one dog stopped to eat during the Search. Though some were tempted and moved a little, most refused the food.

The Send Away was in the direction of the open end of field between the inner markers of giant Tweedle-Dee and Tweedle-Dum and outer markers of the rabbit boxes with stuffed white rabbits. Few dogs went straight out and back between the markers. Most went at an angle toward or through the markers. Some went toward the giant card blinds at that end of the field.

Surprisingly, the jumps ended up being a problem for many dogs. Two dogs fell at the palisade and one did not recover well enough to do a good job on the long jump and the hurdle. Many touched the key on the hurdle hard enough for the 2 point loss. Dogs were also penalized for stepping within the frame of the long jump and had to restart the jump. 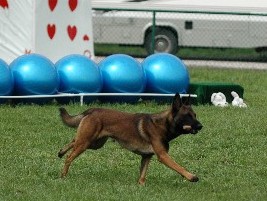 Search for little wood was near the giant mushroom and beach ball caterpillar with team facing the mushroom in the same direction they did the attacks over the balls. The woods were placed nearer and under the mushroom as levels increased. The woods were placed such that they were in two piles some distance from each other, the handler wood was placed a short distance beyond the first pile. The dogs tended to run past the woods and into the corner and missed this exercise. Some stopped at the first pile but did not check beyond when they did not find their wood. Only a few dogs did this search correctly, first searching the pile under the mushroom, then continuing on to the next pile to find and return with the correct wood.

The Defense was arranged along a long tea party table with plates and cups and pitchers of water. Decoys wore giant mad hatter hats. The scenario remained the same for all levels with added challenges in the details. The brevet had one decoy, the handler approached and greeted a decoy sitting at the table, took an offered empty cup then waited for permission to proceed as the decoy went to a flower. Handler went to the flower and pretended to toss cup contents across dog’s face at the flower at which time the handler was hit. For the MR1, handler went length of table to the decoy, conversations took place with water being tossed from cups aimed near the dog. After discussion and noise by the decoys at the table, one decoy escorted the team to a group of flowers where the handler poured water into or onto a bucket and then was hit. This scenario increased with difficulty with more animation from the decoys and more water tossed around. For the MR3 the water was actually tossed into the dog’s face and as the decoy and team moved to water the group of flowers the decoy tried to lure the dog into a chase. The hit was done over the flowers as water was being poured by handler. The dogs handled the distractions at the table fine, a few twitched when the water was tossed near or at them, but they held their place next to the handler. One dog sat at the seated decoy and stayed there as the second decoy led him away past the 10 meter mark. One dog drank the water as it was poured into the bucket.

Both searches hid the decoy behind two giant cards built as blinds. The MR2 away from the crowd, the MR3 at the side near the bleachers. The search was started with the team coming on the field and standing on the podium, the same place where the introduction to judge was made, the same place where the heeling took place and next to the flowers for the Defense of Handler scenario. With exercises taking place at the same locations, it was very important the dog be clear which job was expected. For the search, only one MR3 dog found the decoy quickly and showed a strong alert. Most dogs had problems and some went by the decoy but did not alert, or did not alert convincingly.

The flee took place on opposite diagonal from face attacks. Most dogs did well with this, but two dogs received zero points on the stopped flee for biting the decoy. Accessories for the MR2 were black hose with grass, the MR3 were long strands with cards.

Escort took place with the decoy straddling the giant blue caterpillar balls. This was also used as barrier for attack. All the dogs went over this obstacle fine, one went through. At the MR3 level the decoy maneuvered to place a ball between the him and the dog, then he dodged behind the mushroom and ran. He was able to get good distance away from most the dogs.

The most difficult of all the exercises is the Guard of Object which took place near the place of absence and the object was a big blue tub almost big enough for the dogs to stand in. The Chien Blanc did the best job of defending the object. Two dogs actually climbed into the bucket, the other dogs were placed on a down next to the bucket and did not seem clear about defending the bucket. The decoy showed some slick moves taking advantage and stealing the bucket from the dogs this time around. We look forward to seeing these dogs in the future.